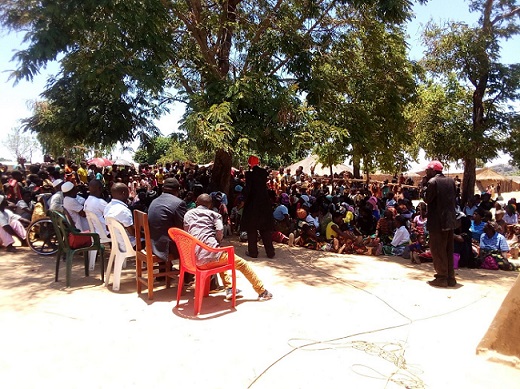 During the last two weeks of October 2019, the Malawi Revenue Authority (MRA) joined by traditional leaders from Senior Chief Jalasi, T/A Katuli and Chowe in Mangochi, conducted public rallies with border communities in the two districts.

The public rallies were aimed at equipping the people of the two districts with information relating to dangers of smuggling, aiding or conveying smuggled goods and how to report suspected cases of smuggling and tax evasion by using the MRA Tip Offs Anonymous service.

Speaking during the meetings, Mrs. Thokozani Chiwaya, urged the border masses not to allow anybody smuggle goods into the country but instead report such people to MRA or use the Tip Offs Anonymous Service toll free number 847.

“When you suspect that somebody is smuggling goods into the country or somebody is sheltering or aiding a smuggler, do not hesitate but report that person to the relevant authorities,” she urged.

On this note, she reminded the people that the Government is geared to provide various socio economic facilities to the people of the area and the country as a whole but these are hard to come by because some unscrupulous business people smuggle goods into the country.

Responding to MRA’s call, Group Village Headman Kalanje, speaking on behalf of TA Katuli at his headquarters, said people in the area will be vigilant against any cases of smuggling and will never allow anybody to use their area to smuggle goods into the country while they watch.

“Am aware that MRA cannot curb smuggling on their own and it is, therefore, my responsibility and that of the people in TA Katuli is to join hands with the Authority to arrest smuggling once and for all, he added.

In this regard, he thanked MRA for coming to his area to convey messages on smuggling which he said will help people to support MRA initiatives more actively than ever before.